As you build adaptive apps, keep in mind the limitations of size classes: they are generalizations, not specific guides for exact pixel sizes or devices. Never attempt to determine what device your app is running on, or whether it's in a split-screen mode, based on the size classes.

Instead, make high-level layout decisions on size class, and use Auto Layout to change precise view frames. (See also the UIViewController method viewWillTransition(to:with:) for a more precise notification of how big a controller's view will be after a transition.)

A key piece of adaptivity in a modern iOS app is supporting multitasking on iPad. By default, apps created in Xcode 7 and newer will be configured to support multitasking: they'll have a LaunchScreen.storyboard file that uses Auto Layout.

The easiest way for existing apps to opt in to multitasking is to create such a storyboard, then set it as the project's Launch Screen: 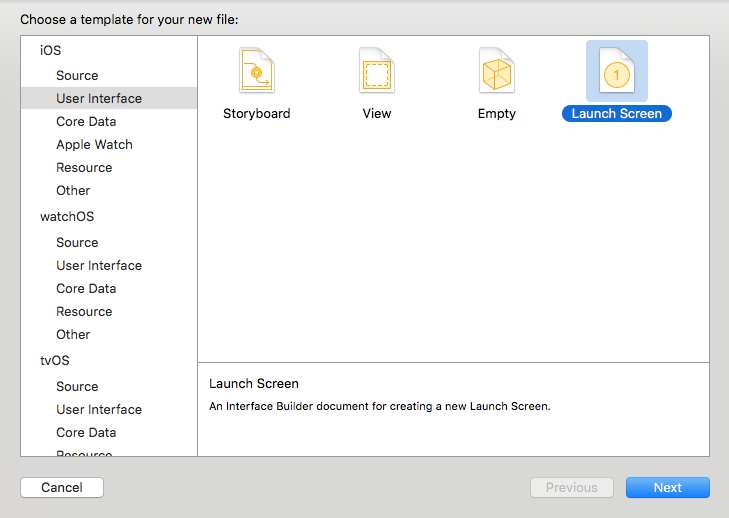 Once your app supports iPad multitasking, audit existing views and view controllers to make sure that they use Auto Layout and can support a variety of size class combinations.

In an iOS app, your user interface can take on one of a few different general shapes and sizes. These are defined using size classes, which are available through a view or view controller's trait collection.

Apple defines two size classes: regular and compact. Each of these size classes are available on both axes of the device (horizontal and vertical). Your app may exist in any these four states throughout its lifetime. As a shorthand, developers often describe a size class combination by saying or writing the two size classes, with the horizontal axis first: "Compact/Regular" describes an interface that is horizontally compact but vertically regular.

In your app, use methods on the UITraitEnvironment protocol to check your current size class and respond to changes:

Both UIView and UIViewController conform to UITraitEnvironment, so you can look at your current trait collection and handle changes in subclasses of either.

This modified text is an extract of the original Stack Overflow Documentation created by following contributors and released under CC BY-SA 3.0
This website is not affiliated with Stack Overflow
Email: tutorialpedia@outlook.com
Next